Time life insurance. Is an annuity a good deal? 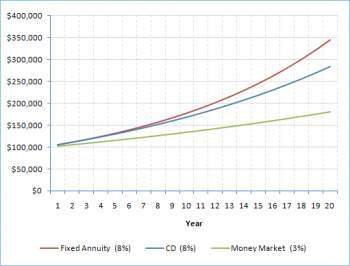 I'm 65 and my financial adviser is recommending I put some of my retirement savings into an immediate annuity. But the payment he quoted me seems low. How do I know if this is a good deal and how do I avoid investing when interest rates and annuity payments are at a low point?--D.B.

Getting an answer to the first part of your question is relatively easy. If you go to Immediateannuity.com's annuity payment calculator and enter such information as your age and the amount you want to invest, you'll be able to see how much insurers are currently paying on average to people who invest in an immediate annuity. Annuity.

These figures are averages, but it's also pretty easy to see what specific insurers are paying. provides a list of quotes online from 10 or so insurance companies, plus you can get quotes from other companies that sell immediate annuities, including Fidelity, Schwab and Vanguard. So you shouldn't have too much trouble determining whether the annuity payment your adviser gave you is competitive.

You want to be sure you're comparing apples to apples, though. The quotes I mentioned above are for "life only," which means the payments stop when you die. For a somewhat smaller payment, you could choose a "life and 10 years certain" option, which guarantees at least 10 years of payments. So, for example, if you die five years after payments started, your beneficiary would continue to receive payments for five more years.

You'll also want to make sure you're comparing quotes from insurers that receive similar financial strength ratings, preferably A+ or better from ratings companies like A.M. Best and Standard & Poor's. Companies with lower ratings often offer higher payouts. But since you'll be counting on the insurer to make those annuity payments for upwards of 30 or more years, I think you're better off sticking to highly rated insurers.

For even greater protection, I recommend you diversify your annuity stash by spreading it among the annuities of two or more such insurers and limiting the amount you invest with any single insurer to the coverage limit of the insurance guaranty association in your state.

As for your question about how to avoid investing in an annuity when interest rates, and thus annuity payments, are at a low, that's a bit tougher to answer. Predicting the path of interest rates is an iffy business. Interest rates have been at or near historic lows for several years now, during which time experts have been predicting that a big jump in rates is right around the corner. So far their predictions haven't panned out.

I fully expect rates will rise at some point, but I have no idea when that will happen or how much they'll climb. Which is why I think the best way to handle that uncertainty is to buy in stages. So, for example, if you plan to "annuitize," say, $150,000 of your savings, you might invest $50,000 now in the immediate annuity of one highly rated insurer, an additional fifty grand a year from now with a different insurance company that has top ratings and then the final $50,000 the year after that with a third.

Doing this won't guarantee you'll avoid a low point in rates, but it will reduce the odds that you invest all of your money when rates and payouts are at a bottom. Buying gradually will also allow you to better gauge how much income you really need as you make the transition into retirement, thus preventing you from possibly devoting too much of your savings to an annuity.

There's a bigger issue, however, that you haven't broached, and that's whether you need an immediate annuity at all. Remember, you already have or will be receiving an annuity that will provide lifetime guaranteed retirement income: Social Security. If there's a gap between what Social Security pays and the income you need to cover your basic expenses -- which you can total up using this retirement expenses worksheet -- then you may want to devote enough of your nest egg to an immediate annuity to bridge that gap (taking care, though, that you have enough savings left over to provide money you'll need to cover non-essential expenses, handle emergencies and pay for any other unanticipated outlays).

If, however, Social Security covers all or most of your essential living expenses, you may be able to get along fine without an annuity. Similarly, if your nest egg is very large, then you also may not need an annuity. You may be able to simply pull money from your savings as you need it. To see how long your nest egg might last at various levels of annual withdrawals, check out this retirement income calculator.

That said, even if the financial case for buying an annuity isn't especially compelling, you may still want to own one. The reason is that research shows that people who have annuity-like income in retirement tend to be happier and enjoy their post-career lives more, presumably because it's comforting to know that they can count on a specific amount of income each month no matter what's going on in the financial markets.

Bottom line: an immediate annuity can be an efficient way to turn a portion of your savings into guaranteed lifetime income. But that fact alone doesn't mean you're a candidate for an immediate annuity, even if the quote itself is competitive. So I suggest you set aside plenty of time to learn more about annuities' pros and cons. And then buy only if you're truly convinced that an annuity is the right move for your situation.

What is life insurance for

There are no comments for this post "Is an annuity a good deal?". Be the first to comment...