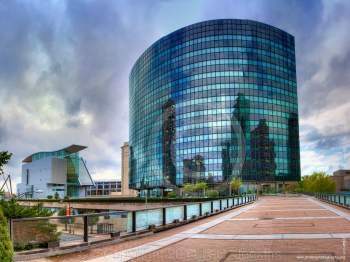 As with so much about Hartford, the story begins at the Connecticut River. Hartford insurance.

The city rose to prominence in the 1700s as a river port, serving as a conduit for goods arriving from or heading to places like England, Bermuda, and the Far East. River captains, who met frequently on the wharves and in coffee houses, often arranged to share voyage risks and profits. From these informal arrangements, the Hartford insurance industry sprang, eventually offering much more than marine coverage.

In 1794, wealthy Hartford merchant Jeremiah Wadsworth and some friends began offering fire insurance on an informal basis. In 1810, the Connecticut General Assembly awarded a charter to the state's first publicly owned insurance firm, The Hartford Fire Insurance Co. The Aetna Fire Insurance Co. opened for business nine years later. But the city's reputation as a reliable insurer wasn't made until the calamitous New York City fires of 1835 and 1845, when Hartford companies fulfilled their payment promises while many others didn't.

No Connecticut company offered life insurance until 1846, at least in part because the local clergy regarded it as immoral. That year, however, saw the formation of the Connecticut Mutual Life Insurance Co. of Hartford.

Insurance companies sprang up elsewhere in the U.S. during this period, so how did Hartford end up with the moniker? Historian Ellsworth Grant puts it this way: "The uniqueness of Hartford's companies lay in building a solid reputation for staying solvent, keeping their promises to pay losses, hanging on in times of disaster, and initiating new types of insurance."

Hartford insurers were the first to offer accident, auto, and aviation policies, among other innovations. In World War II, The Travelers helped insure the creation of the atomic bomb. This experience led to Hartford insurers' vital role in the development of peacetime atomic energy.