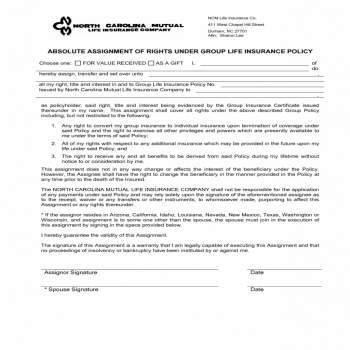 Not as common as individual life insurance, joint policies are designed to enable two people, typically spouses, to share in one life insurance plan. Joint life insurance comes in two flavors: first-to-die, which pays out to the surviving spouse after the first dies; and second-to-die, or survivorship, which pays a death benefit to the heirs after both spouses are gone.

“First-to-die and second-to-die generally have different purposes,” says Steven Brostoff, a spokesman for the Washington, D.C.-based trade association the American Council of Life Insurers. “Second-to-die can be used to help pay estate taxes and/or to provide a financial legacy to children, while first-to-die is more suited for young couples with children — to replace lost income or services provided by the deceased parent.”

Second-to-die, or survivorship, life insurance is offered by a handful of insurers and is typically geared toward affluent people concerned about the potential for hefty estate taxes on what they leave behind. For 2013, the estate-tax exemption will be $5.25 million for individuals and $10.5 million for married couples, which means an estate has to be worth more than the threshold for the tax to kick in.

“Because estate taxes are only applicable to a small percentage of (very wealthy) people that die each year, those policies are very large,” says Elaine Tumicki, corporate vice president of product research for LIMRA, an insurance and financial services trade group based in Windsor, Conn. The policies make up “a relatively small piece of the insurance market,” she adds.

It’s not unreasonable to estimate that a $1 million joint survivorship policy would be 20 percent cheaper than two $500,000 individual life policies, Finneran notes. Premiums and savings will vary based on the insurer and the age and health of the persons being insured.

Besides being economical, another benefit of a second-to-die policy is that it provides a level of protection to those whose health might bar them from getting their own individual life insurance policy. “It can be a way for a person who would not qualify for a single life policy to get some coverage, assuming the other spouse is insurable,” Finneran says.

First-to-die joint life insurance is less common than second-to-die, but it is sold by some better-known insurers. For example, State Farm offers a joint universal life policy in which the death benefit is paid when the first spouse dies. Coverage starts at $100,000 and is available for people ranging in age from 20 to 85.

A first-to-die policy may be the right product for married people who want a surviving spouse to be able to maintain a certain lifestyle but wants to pay less than the cost of two individual polices.

“It’s only paying out once, so naturally it will be less than two payouts” and that makes the cost lower, says Brostoff, of the American Council of Life Insurers.

But don’t expect a first-to-die policy to be substantially cheaper than two individual policies. There isn’t enough of a market yet for this particular type of joint life insurance to drive premiums drastically lower, says Finneran. Plus, since there is only one payout, there may be a need for the surviving spouse to spend money on new coverage after the other dies.

Divorce can break up the joint

Whenever anyone considers a first-to-die or survivorship policy, one of those “let’s not go there” but must-be-addressed questions is: What happens if there’s a divorce?

In the event that the two members of a covered couple decide to go their separate ways, these insurance plans can come with optional riders or clauses that provide for the right to split the policy into two individual ones. Keep in mind that there can be restrictions on when the policy may be split, says Finneran, of MetLife. In some cases, a couple must be divorced for a certain length of time before the right to split the policy can be exercised.

Experts advise couples shopping for joint life insurance not to sign up for any policy before making sure a divorce clause is included. If it’s not, find a different policy. You want a joint life policy that will allow you to disengage, says Tumicki, of LIMRA.

“Getting divorced is a very difficult question the couple needs to resolve before they purchase the (joint life insurance) policy,” Brostoff adds. “Even though you don’t want to think about it, it does happen.”

There are no comments for this post "Joint Life Insurance: Policies Built For 2,". Be the first to comment...