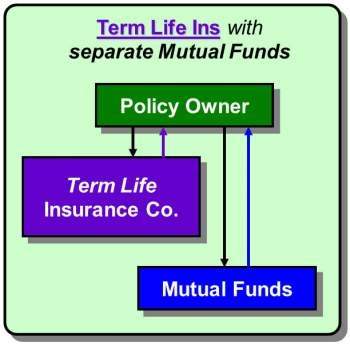 The interest paid on standard universal life products is determined by the board of directors of the company based on the company's interest earnings, and is influenced by their level of expertise and competition in the field. While this may be comforting to some, many insured investors think the investing of the cash values is better off in their own hands. Thus, the creation of the variable line of products: variable life, variable universal life and variable single-premium life. Variable life insurance.

Variable life was introduced in the Netherlands in the 1950s by DeWaerdye, LTD. By the 1960s, it’s popularity had spread into the United Kingdom. From there, British influence led to the introduction of a combination life insurance/equity investment contract in Canada.

As expected the 2000-2002 recession slowed sales in all variable products as investors fled due to poor market returns, and sought the shelter of guaranteed products such as fixed and indexed universal as well as standard whole life insurance.

Today the stock market remains as volatile as ever. To stay competitive and combat volatility, Insurers now offer Variable Universal Life with “Guaranteed No Lapse” provisions similar to those found in Universal Life contacts. Expect the No Lapse feature to come at increased mortality costs or restricted fund allocations.

The concept remains the same as universal life: there is a minimum premium requirement which goes to the costs of insurance and the balance goes into your chosen mix of side funds. The primary difference from universal life is you control the investments, choosing between several (between 20 to 100) investment sub-funds ranging from most investment sectors from money market to Gold to Emerging International to Corporate Bonds. You are able to mix and match investment and change from fund to fund tax free with no transaction fee, usually you are limited to 12 times major allocation changes per year; however, we do have some which can be traded daily.

The company will charge around 2-3 percent for asset management fees, mortality costs and administration. For example, if your investments return 20 percent gross, your net return could be around 17 percent.

Each tax season mutual fund owners pay what is called a distribution tax. The tax you must pay a tax on the capital gaines both long and short term for the stocks sold within the mutual fund. You also must pay income tax on any dividends received from the fund. Such a tax can eat away up to 5% of your realized return each year. By moving your investment dollars from a taxable mutual fund into a variable life product, you can invest in the same types of mutual fund vehicles but the money grows tax-deferred; no capital gain or distribution tax is due.

As with all permanent insurance policies, you can withdraw the money income tax free.

Another great way to take advantage of variable life policies is to use them as gifts to children or grandchildren. By purchasing a variable life policy for a grandchild, the grandparents not only lock in that child’s insurability, they also provide the child with a growing fund that can be used for various purposes during their life (e.g. college, marriage, and home purchase).

If the premium amount paid each year is within the $13,000 per year per donor/doneee (IRS limit for gifts), it becomes a tax-free gift from the grandparent under a UGMA/UTMA.

Who Should Buy Variable Universal Life

VUL is not for everyone, but it can make an attractive addition to your portfolio if you have a suitable risk tolerance and want the control of making your own investment decisions with your insurance policy.

You should purchase variable universal life if you:

Want life insurance that will last a lifetime as long as you keep sufficient cash in the policy.

Want to give loved ones a benefit that is not taxed (as with all insurance products.)

Want to take advantage of the tax-deferred growth.

Want to be able to withdraw money tax-free.

Want control of your investments within the policy (pick from numerous investment portfolios).

Want to take an active role in your investment (can change allocation e.g. from growth to value or bonds to hard assets).

Are willing to take on more risk for the potential of higher market returns.

Don’t mind paying a little extra to have the options and flexibility of variable universal life. (You would need to earn roughly 2% gross annually more on your investments with a variable policy to breakeven with a universal policy).