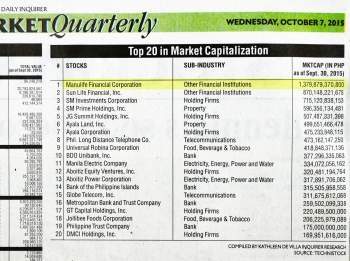 year in a row. With its increase in 2014 of a little over a billion pesos in total premiums, Sun Life proves to be among the most stable insurance companies. Apart from maintaining its prime spot, Sun Life has surpassed itself by creating a wider gap between the second top company, with a difference of little over twelve billion pesos in total premiums.

Having been in the insurance industry for over a century, Sun Life has been able to create products and services that are able to meet all the needs of people. Moreover this company is known for their relevant and significant marketing strategies, which have given them an edge in this industry, allowing the company to hold on tightly to that top spot.

While the top spot still remains the same, there has been a shift among the 2

spots. The year 2013 saw Philam Life and AXA Philippines at the 2

spot, respectively, with a difference of over a billion in total premiums. However this was not the case for 2014. AXA Philippines has bumped Philam Life off the 2

spot and reclaimed the position they had held for many years, prior to 2013. With their aggressive and revolutionary marketing strategies, AXA Philippines proves, once more, why they deserve to be part of the top three.

spot with just a small difference of thirty million in total premiums, the total premiums of Philam Life from America have dropped slightly from its phenomenal PhP 19 billion in 2013 to PhP 18 billion in 2014. Nonetheless, their performance is still top rate and noteworthy.

spot is Prulife UK, which maintained its ranking of number 4. Although the total premiums of PruLife UK have decreased by PhP 3 billion from 2013, Prulife UK is still able to hold to its prime position in the rankings due to their strong marketing arm.

2014 has also seen a slight restructure in the rankings of BPI-Philam and ManuLife. Though they still performed well this year, ManuLife has fallen down a spot to the 6th ranking. With a little over a billion difference in total premiums, ManuLife is just a little behind BPI-Philam. Climbing to the 5

spot. However the largest local insurance company improves and is seen to be going up the rankings by claiming the 7

Taking a look at the whole picture, 2014 produced premium income of P157,831,673,089. While this number is smaller than 2013’s total premium income of P170,280,660,057, it shows that there is stiff competition in the insurance industry and was brought about by lower single pay premiums. Ultimately, these numbers indicate that Filipinos are becoming smarter about their money, with more people seeing the value of setting some aside for their long-term financial security.

Complete rankings of all other categories (net income, net worth, assets, etc.) can be found at the Insurance Commission website or click HERE

There are no comments for this post "The Top Life Insurance Companies of 2014 in Premiums, Randell Tiongson". Be the first to comment...