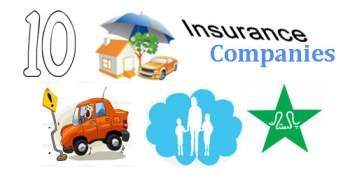 The first five companies profiled specialize in life insurance and annuity products over over lines of insurance. Some such as MetLife do offer property and casualty lines, while others such as Mutual of Omaha do not. What they have in common is a history in and continued emphasis in life insurance.

Founded in 1863 to provide disability insurance coverage to Civil War veterans and entering the life insurance field five years later, Metropolitan Life Insurance Company (commonly known as MetLife) grew over the years to become one the largest insurance companies in the United States.

Indeed with over $3 trillion worth of life insurance in force, today MetLife is the single largest life insurance underwriter in the country. In March 2010 MetLife announced the acquisition of AIG's life insurance portfolio, which means that number stands to get even bigger.

In addition to offering a full range of life insurance and annuity products, MetLife specializes in group insurance marketed to employers. The company is a leader in group dental and disability, underwriting benefits for 90 of the Fortune 100.

While MetLife does offer property and casualty lines of insurance such as auto and home, its focus remains on life insurance, annuities and other financial products.

Originally known as the “Widows and Orphans Friendly Society” when it was founded in 1875, Prudential grew from a company which offered a single insurance product – burial insurance – to an extremely comprehensive financial services provider. Smaller than MetLife in terms of life insurance business, Prudential's book of business nonetheless very impressive, exceeding $2 trillion worth of life insurance policies in force.

Although many companies retreated to their core businesses during the current recession, like MetLife Prudential's business scope remains far-reaching. In addition to providing life insurance and annuities, Prudential through its subsidiaries offers group life and disability insurance, a full service stock brokerage and real estate services.

Perhaps best known for its sponsorship of the long-running "Wild Kingdom" television series, the century-old Mutual of Omaha is also one of the country's leading life insurance underwriters.

More so than MetLife or even Prudential, the Nebraska-based Mutual of Omaha places an emphasis on life insurance and annuity products, only entering the employer benefits field in earnest the 1980s and retail banking in 2007. Like Prudential, Mutual of Omaha does not sell property-casualty products such as auto and home insurance. However, through its Continuum Worldwide subsidiary Mutual of Omaha offers consulting services in operational risk management.

Founded in 1845 as the Nautilus Insurance Company, New York Life is the largest mutual (i.e. owned by policyholders) life insurer in the United States. It has long prided itself on its superior financial strength and its progressive stance on insurance products, being one of the first life insurance companies to offer policies to women and disabled people. The company is also a pioneer in disability insurance.

Unlike many insurance companies and other financial institutions, New York Life maintained its superior financial strength throughout the recent recession and declined to participate in government bailouts. Although New York Life flirted with demututalization in the late 1990s, it ultimately declined to go public and today remains the largest privately-held insurance company in the country.

Although founded in its current form only in 2004 as a spinoff from General Electric, the Richmond, Virginia-based Genworth Financial traces its history to a Richmond area life insurance company founded in 1871.

Genworth is strictly a life insurance carrier, offering a full line of term, whole and universal products. It also specializes in mortgage insurance, which is designed to pay off a mortgage in the event of the homeowner’s death or other circumstance which renders him or her unable to pay.

These following companies are known as “multi-line” insurance companies. In other words, they offer life insurance products, but their area of focus tends to be property and casualty lines such as home and auto.

Allstate is actually a conglomeration of 15 separate companies based in the United States and Canada. Founded in 1931 by Sears, Roebuck and Co., Allstate remained part of the department store conglomerate until the early 1990s.

Although less than 10 percent of its gross sales are in life insurance products, Allstate sells the usual compliment of fixed life and annuity products through its Northbrook, Illinois-based Allstate Life Insurance Company subsidiary. Products in certain states may be available through one of its other subsidiary companies due to differing legal environments.

Allstate offers variable life and annuity products through yet another subsidiary, Allstate Financial Services, LLC. This company is known as a “broker/dealer,” and is dedicated specifically to the sale of variable insurance and related products. This corporate arrangement of specialized subsidiaries is fairly common among large multi-line insurers.

Allstate utilizes a “captive agent” sales force, which means that insurance agents appointed by Allstate are contractually obliged to sell Allstate insurance products exclusively unless Allstate is unable or unwilling to insure a particular risk.

State Farm was founded in 1922 as an auto insurer targeting Midwestern farmers, who company founders believed were a safer risk than the general population. Today State Farm is the top underwriter of auto and home insurance in the United States and has a significant presence in Canada as well.

State Farm and Allstate have much in common. Both are large multi-line insurers which offer life and annuity products but emphasize property-casualty products. Both employ captive agent sales forces. Both utilize several subsidiary companies including a broker/dealer for variable products. Both followed MetLife's lead and are now in retail banking. Finally, both are headquartered in Illinois (Allstate in the Chicago suburb of Northbrook, State Farm downstate in Bloomington).

The West Des Moines, Iowa-based Farm Bureau Financial Services is one of the larger members of the loosely confederated group of insurance companies affiliated with the national and state Farm Bureau organizations throughout the country. Unlike other multi-line companies, the Farm Bureau companies have little to no central authority at the national level, with state and regional companies largely left to determine corporate policy on their own.

Although FBFS itself currently operates only in 15 states, primarily in the Midwest and Intermountain West, its policies are recognized nationwide. Residents of states outside its jurisdiction may be referred to other affiliated Farm Bureau carriers.

Founded in 1928 in Los Angeles, Farmers Insurance is currently the third-largest property and casualty insurer in the United States behind State Farm and Allstate despite only having a presence in 41 states. Since 1998 Farmers has been a subsidiary company of the international insurance conglomerate Zurich Financial Services.