Affordable insurance. Critical Illness Cover - Do I Need it? 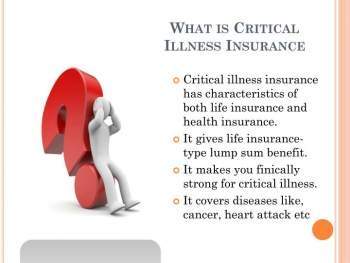 That makes for grim reading.

But here’s the thing. Lots of Irish people do the lotto, especially if it rolls over to a massive number. They think there’s a chance they might win.

And yet lots of Irish people have no cover if they get heart disease or cancer or have a stroke.

The odds don’t add up – but so many people still take the risk.

So, what are you supposed to do to defend against illnesses like a stroke or a heart attack?

Enter: Critical Illness Cover – also called Serious Illness or Specified Illness Cover, because the insurers are gas for coming up with ways to make it more complicated. See also: Life Insurance and Life Assurance. Both are also the same thing.

Critical Illness Cover – what is it and why do you need it?

For the purpose of this blog and to uncomplicate things, I’m going to use one phrase: Critical Illness Cover. You’ll see why…

Critical Illness Cover pays you a tax-free lump sum if you get sick with one of the critical illnesses listed on your policy. The latter part is where it gets a little twisty, as the definition of your illness has to match the definition as laid out in your policy.

Which means you might be thinking, “sure Jesus, Nick, what’s the point in paying for that?”

For one, non melanoma skin cancer sounds terrifying but it’s highly treatable with about 90% of cases successfully cured and it rarely causes a long term absence from work.

And two, the critical illnesses covered include the big three: all advanced cancers, stroke, and heart attacks. These account for 80 percent of all claims.

Again: those are decent odds. Chances are you’re probably not going to go bankrupt if you contact a non-melonoma skin cancer, but 1 in 5 Irish people suffer from a chronic illness like heart disease, stroke or COPD (a little-known lung disease). Chronic illnesses may see you out of work for a long time and this is when the critical illness payout is a lifesaver.

Most policies also cover a lot of the other big, troubling illnesses and diseases like MS, brain tumours and Alzheimer’s.

That tax-free lump sum would be reallllly useful if you were struck with one of the critical illnesses. You could use it to reduce or pay off your mortgage or to cover medical or day-to-day expenses.

If you’re seriously ill, you can use the lump sum to replace your income. (Another option is Income Protection, which pays you up to 75 percent of your income if you fall sick for more than a certain amount of time.)

And look: what would happen if you had a heart attack and were out of work for a while? Your mortgage and bills still need to be paid.

You’ll have seen this foreboding word of warning on your mortgage documents:

Your home may be repossessed if you do not keep up repayments on your mortgage.

This is what your lender really means:

If you cannot keep up your payments for any reason, even if you are ill, have an accident or lose your job, then that is a problem for both of us. We will try to help you for a while but will do whatever it takes to recover our money – even if that means repossession.

So y’know, when you look at it like that it seems like a massive brain fart to not even consider some kind of cover. If you loop back to those odds at the start, have another think about the lotto.

You probably buy a lotto ticket the odd time – so why wouldn’t you protect yourself against something that’s infinitely more likely to actually happen?

But is cover expensive – and how much do I need?

I can’t give you a figure off-hand as the cost of Critical Illness Cover depends on how much cover you want, your health, your age, and how long you want to insure yourself for. Other factors might come into play too like if you smoke or have a high BMI.

However, I recommend €30,000 cover for most people who have Income Protection as well. Think of it like this: how much money would you need if you had to stop your life for a year to deal with a critical illness?

That’s roughly what you’d need to account for. Income Protection will cover a lot of the day-to-day, while Critical Illness Cover can look after the additional new costs: appointments, any hospital stays, medication, and financial hiccups that might happen in between.

Let’s look at an example: two 40-odd year olds who want €250,000 Life Insurance each across a 15 year term, with a convertible option. They also want to bundle Critical Illness Cover.

If they just get Life Insurance, the cost will look like this:

If they bundle €30,000 Critical Illness Cover, the price becomes:

For about €4 a week extra, you’ll be covered for the vast majority of very nasty illnesses.

That’s roughly the same price as doing a line on the lotto every week.

Critical Illness Cover – Over to you…

If you’re considering Critical Illness Cover, please get in touch before you make a decision because there are subtle differences between the policies on offer at each insurer that you should know about.

There are no comments for this post "Critical Illness Cover - Do I Need it?". Be the first to comment...